Coming from the evergreen Chinese Illicium verum, it is extracted from the star shaped pods of the fruit of this tree. With a flavour that is vaguely reminiscent of liquorice, it is famed for its distinct culinary applications and health benefits. Exquisite and rare, the spice comes from this oriental tree found in the far reaches of China. It first entered Europe in the 17th century, and has since become popular there as an unusual oriental spice that comes in whole star-shaped form or ground to a red-brown powder.

Star anise’s usage has seen a metric rise in the manufacture of European commercial drinks. Star anise suppliers extract its oil through a steam based process, which is then used as a substitute for European aniseed in these drinks. It also has rare usage in the manufacture of medicinal substances. Usually herb and spice driven medical products fail to give due credit to the organic materials involved. Similar is the case with star anise, where its powerful health benefits in normal food usage is overlooked. Here are a few remarkable benefits of star anise:

Star anise’s bioactive compound content is off the charts. These are powerful agents of good health. Most valuable among these is star anise’s impressive supply of polyphenols and flavonoids - both of which are responsible for the spice’s wide applications in food and medicine. Specifically star anise contains a rich range of antioxidant and antimicrobial nutritional compounds: linalool, quercetin, anethole, shikimic acid, gallic acid and limonene.

Of immense use in the current times of pandemic, star anise’s anti-viral properties have enhanced its demand. Wholesale spice suppliers vouch for this since the shikimic acid content of the spice makes it the only contender for use in the manufacture of anti-viral pharma products. The expanse of star-anise’s anti-viral benefits can be derived from this information, and thereby it is highly recommended as a dietary supplement.

It provides a rich source of potent anti-fungal compounds to the body, such as flavonoid anethole. This compound also gives star anise its distinct taste. The overall composition of this spice has proven rich in anti-bacterial attributes, helping you fight common diseases. 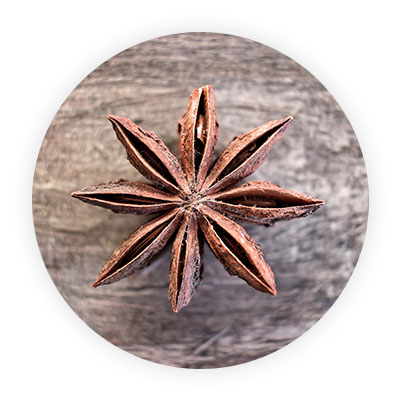