The most expensive spice in the world, saffron is the dried stigmas of the saffron crocus, painstakingly harvested through a labor-intensive process. It takes approximately 70,000 blossoms (or 200,000 handpicked stigmas) to form one pound of this spice. Originating in the Greek Mediterranean, saffron forms an indelible part of the cultural history of the world.

The Romans are believed to have brought the spice to England, where it is a highly priced commodity even today. Legend speaks of a fourteenth century pilgrim who smuggled a single crocus bulb in a hollow staff into England - from where all English saffron descends. Europe’s history is resplendent with mentions of saffron’s exotic properties. Saffron exporters grow it in large volumes in Essex, in a town named Saffron Walden. The famous English philosopher and statesman of the 16th century, Francis Bacon, once said of saffron: ‘It maketh the English sprightly’.

Such has been the reverence around saffron’s astonishing abilities, that it was used to scent the public baths and royal halls of Imperial Rome. Europeans have long consumed saffron to enhance mood, build libido and boost memory. With a strong aroma of honey and bitter-sweet flavour, saffron offers a plethora of rich benefits as part of modern cuisine and contemporary medicine:

Nicknamed by organic spice manufacturers early on as the ‘sunshine spice’, the name alludes not only to its sun-like yellow colour, but also to its ability of brightening your mood. An effective supplement against mild depression, studies have shown that 30 mg of daily saffron intake is as effective against depression as conventional treatments. However, the usage of therapeutic treatment cannot be done away with. Saffron is to be used more as an effective supplement rather than as medicine.

As per studies, saffron is helpful in reducing the physical and mental challenges of the pre-menstrual syndrome. Saffron helps relieve irritability, anxiety, cravings, headaches and physical pain experienced during PMS, especially in women aged between 20-45. Even long periods of smelling saffron (about 20 minutes) reduces the stress-hormone (cortisol) levels, thereby reducing PMS related stress.

Saffron acts as a natural aphrodisiac - a property that made its use famous since ancient times. Even modern studies prove this effect, wherein regular saffron intake has shown better results over a placebo in enhancing erectile function and libido in men. It reduced sex-related pains in females, enhancing overall satisfaction for both sexes. 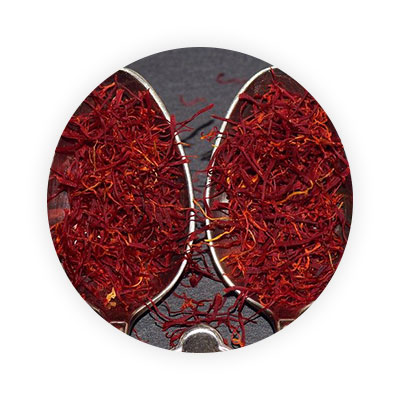