The Bay-Leaf spice is as noble as it gets. From its scientific name Laurus Nobilis to the ancient traditions of nobility associated with it, everything bay-leaf related shines with a spirit of nobility. Its radical ability to grant health and wisdom is the reason these traditions are carried on till today. From ancient Greeks who used to bedeck their poet laureates as well as men of science with bay leaves, to Olympic champions of today, bay-leaf has signified great spirit, intelligence, wisdom and health, and for good reason too.

Found naturally in parts of America and Asia, it is oval in shape and dark green when fresh with a slightly bitter flavour and a strong aroma. Once dried, it turns matte olive green, and is strongly pungent once broken to release those magical aromatic oils. Bay leaf exporters report its significant use in European cuisines dates back to ancient Greek when the god Apollo is said to have made the bay-leaf sacred. Associated with honours and glorified accomplishment since then, bay leaf began to be used in the recipes of aristocracy.

Continuing this historic trend, high-cuisine employs the use of bay-leaf abundantly in bouquet garnish, savoury dishes and soup specialities. In the modern era bay-leaf has taken a reputation if its own, thanks to its exceptional health related benefits:

Its composition of lauric acid gives it astringent properties, meaning its external application helps heal wounds and stop bleeding. This also serves as a cosmetic property, useful in making the skin less oily.

A unique property of bay leaf is its ability to enhance sweating. Of great use in modern fitness culture, this property is used by fitness experts to reduce fat and enhance sweat-intensive workouts. Diaphoretic ingredients also help reduce bodily toxins and keeps the skin healthy.

Bay leaf extracts consist of parthenolides, a substance that is widely used in relieving chronic migraines. The intake of bay leaf as regular food supplement prevents reoccurrence of migraines and headaches. 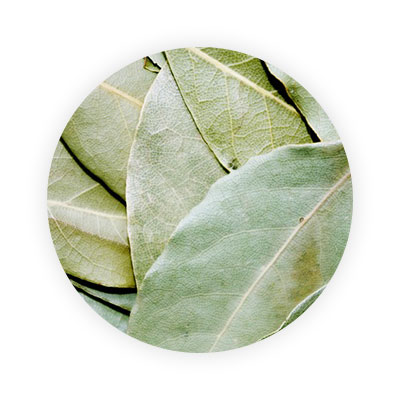