Highly popular in European confectionary items, poppy seeds are a rage in western bread and bagels. Known scientifically as papaver somniferum, it is native of the middle-east, but also grows wildly and through cultivation in North America and Europe. As its last scientific name suggests, ‘somniferum’ refers to its ‘sleep inducing’ powers. This rare property of poppy has done a lot for sleep-aiding medicinal purposes and other health benefits, increasing the incentive for poppy production worldwide among poppy seed exporters.

Poppy as a spice is popular in home-made delicacies. Poppy oil as well as extract is a proven substitute in cooking for olive oil and the likes. The seeds fried in butter are also added to Italian favourites like pasta and noodle varieties. As a flavouring agent it is added to vegetables and their delicious sauces. For this purpose poppy is especially famous with root vegetables and asparagus. Offering a variety of delicious culinary uses, poppy seeds provide preparations with contrast of both texture and colour. This effect is most commonly viewed with coleslaw dishes where poppy is sprinkled.

Having gained a name for itself among spice manufacturers and cuisine cultures, poppy is just as famous when it comes to medicinal usage. Some of its great medical benefits include:

A common painkiller known since ancient times is ‘milk of the poppy’ - a poppy seeds extract. Technically called an ‘anodyne’, poppy has miraculous pain-numbing properties. Modern research shows these abilities of poppy are a result of compounds like morphine, codeine and thebaine that are present in it. These also lead to a calming effect in the patient, and are frequently found in pharmaceutical drugs, however with poppy they are a purely organic addition.

Apart from its anaesthetic properties, poppy is highly useful as what is called an ‘expectorant’. It functions as a substance that is used to increase the secretion of sputum in the airways, helping relieve chronic cough.

Research shows that unsaturated fats are helpful as a diet supplement for heart health. Poppy seed oil is known to be rich in poly and mono unsaturated fats, which are also useful for external application to heal wounds and treat scaly skin lesions. 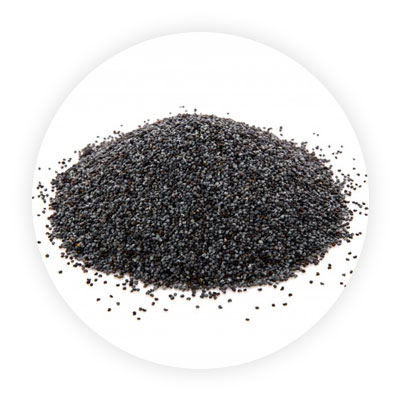